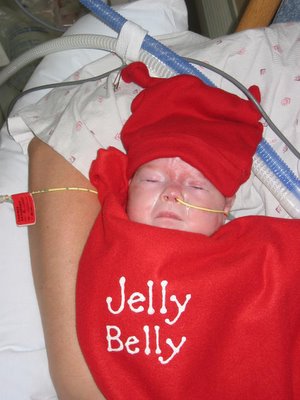 The big day has almost arrived. Emma’s heart surgery is scheduled for 7:30 tomorrow morning. Today at 4:30 we are going to the operating room to have her trach temporarily removed until after the heart surgery. She will have a normal breathing tube put back in for the surgery. The trach was too close to where they needed to cut her open for the heart surgery. They decided to take the trach out the day before the surgery just to make sure that she is completely stable before putting her on the heart lung bypass machine. As of right now, we are supposed to be at the hospital tomorrow morning at 6:00. At 7:00 the anesthesiologist will get her ready and then at 7:30 the surgery begins. The surgery should take about 3 hours and there is a 97% chance of survival for a baby her size. They will cut open her chest and remove her heart to repair the hole. After the surgery, she should not require any additional surgery for her hole. There is a 1 and 30 chance that she could require a pace maker after the surgery, but it will take 7 to 10 days to determine if she needs it. Her surgeon Dr. Gates is confident that she will do fine. On Saturday we spoke to her cardiologist Dr. Berdjis and he told us that Emma told him that she was ready. There are always risks with any surgery, but we are confident that God will bring her through this. We are still nervous and anxious for it to be over. Please be praying for Emma and for us tomorrow. It will be a long morning of waiting. I will try to send out an update tomorrow evening with the results.

I just wanted to send out a real quick update on Emma this morning. She is tentatively scheduled for heart surgery on November 1, but she came down with a fever last night. They put her on antibiotics, so she may have her surgery postponed. She has not been tolerating her feedings very well since her tracheostomy surgery and has been staying right around 5 pounds 8 ounces. The cardiology team meets on Wednesdays so we should get an update on her surgery today. I will let you all know once we have a firm surgery date. Thanks again for all your prayers.
Posted by Mark at 8:44 AM No comments: 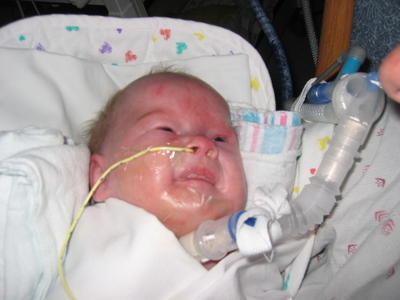 I have a few updates for you this morning. Emma had her trach changed on Tuesday and ever since she has been doing great. They put in a larger one and she seems a lot more comfortable. We even got to hold her the past 2 days. Yesterday the cardiology team met and set a tentative surgery date for Emma of November 1. Things change all the time, so I am not holding my breathe. It also turned out that she did not have pneumonia. She had an infection from the trach incision. The doctors have started her back on her feeds slowly and she finally handled some milk. They will slowly get her back to full feeds. Alissa and I will be heading back home for about a week because our host has other company coming in from out of town. Now that Emma is doing fine, we are more comfortable driving a little bit further. We will be back in Tustin when Emma has her surgery.
Posted by Mark at 9:57 AM 2 comments:

Emma is having a hard time adjusting to life on the trach. The doctors are trying to keep her very still because when she moves, she has more spells. Saturday was a very rough day as she consistently started having low blood oxygen levels. Her heart rate was dropping as well. The pulmonary specialist ordered her a custom trach just in case. In addition, Emma has been agitated because she has pneumonia. Alissa and I were feeling very discouraged because we though that she was going to be getting better at CHOC, not worse. The doctors assured us that it is not unusual to see this when a baby first gets a trach. We just pray that this part of Emma’s treatment passes soon. It has been the roughest part yet. Emma has also been having a hard time digesting her food and they have cut back on her feeds. Since Emma is not recovering quickly from the trach operation, there is no reason to transfer her back to CHOC Mission since she will be having her heart surgery in 2 to 4 weeks. That means another month or more living out of our suitcases. We went and visited our nurses and doctors at Mission yesterday afternoon for some love and support. It was very nice to see our extended family. Who would have ever thought that we would actually miss the hospital? Please continue to pray for Emma’s healing and for our stress levels.
Posted by Mark at 5:12 PM No comments: 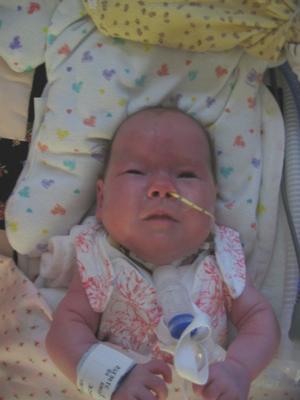 On Monday afternoon we were informed that there was an opening in the operating room on Tuesday so they wanted to schedule Emma for her tracheostomy. We arrived at the hospital at 9:00 am and they were ready for her already. We were taken through a tunnel under the street from CHOC to St. Joseph’s. At that point we sat in a waiting room while Emma had her surgery. It when very well and now she has a trach in her neck. For the most part, she has been adjusting to it all very well. She had a couple of minor spells yesterday and last night, but hopefully that is just a part of it. After the surgery we spoke with one of our cardiologists and he told us that if Emma can breathe well on her own with the trach that we will wait a few months to have the heart surgery. That means a lot longer in the hospital, but it also makes for an easier surgery. The plan for right now is for Emma to remain in Orange for a week until the first trach change is done by the surgeon. If all goes well until then, she can be transferred back to Mission as early as next Tuesday. We are becoming more comfortable at Orange, but miss our nurses at Mission.
Posted by Mark at 8:17 AM 2 comments:

Last weekend was an extremely long weekend. When Alissa and I arrived home on Friday after work, we had a message from Dr. Hanten at CHOC Mission that Emma was going to be transferred up to CHOC in Orange to have a bronchoscopy. Emma has been doing so well on the ventilator’s minimal settings that they wanted to take her off of it. But, before taking her off of it, they needed to check further down into her respiratory system to see if there was a reason why she crashed the last time she was taken off of the ventilator. If everything looked good, they would monitor her for 48 hours and then transfer her back to Mission until she could have her heart surgery. On Saturday we were told to arrive at the hospital at 10:00 in order to sign the transfer forms and get ready for the ambulance. They finally arrived just before 3:00. Emma wasn’t happy about being moved, but she finally settled down with the help of some sedation. When she arrived at CHOC in Orange, she had some of her typical fits and they had their hands full with her. They were supposed to do the bronch Saturday evening, but decided after reading her history to wait until the morning when everyone would be fresh and they would have more people on hand. She was scheduled for the procedure at 9:00 and just before she started to have an episode. She was gasping for breathe, but fortunately they were able to stabilize her quickly. At that point we went into a waiting room until they did the procedure. About a half hour later the pulmonologist came in and told was happened. They put a scope with a camera down her nose and looked around her airways to see if there were any blockages. Unfortunately, there was. She has a floppy airway that clamps down if she doesn’t have something keeping it open. That is why she has been OK on the vent with minimal settings, but crashes when she is off. The floppy airway is in her trach, and even with the vent, it was not always staying open if she wiggled too much. As a result, Emma is going to have surgery this week. She is going to have a tracheostomy. For the next 6 to 18 months, she will have a trach tube in her neck to keep her airway open. Over time, as she grows, she will no longer need it. Obviously, this was not the news we wanted to hear. I was however relieved to finally know why she crashed 4 weeks ago. I have been so stressed thinking it might happen again. After doing the bronch, the doctor put a new breathing tube down her nose instead of in her mouth. This will keep it more stable and he was able to place it in exactly the right place because of the scope. Today the ENT surgeon will be contacted and the surgery will be scheduled for later this week, probably Wednesday or Thursday. Once she has the surgery, she will remain in Orange at least a week until they change her tube the first time. Then, she could go back to Mission for a little while until she gains enough weight for her heart surgery. Alissa and I were overwhelmed when we first walked into CHOC in Orange. It was a huge change from our “home” at Mission. It is so much more chaotic and huge. Our room is a lot smaller too. It will be a hard adjustment. We felt a little more comfortable after 24 hours since they all knew Emma’s history by then. Thankfully, we have a place to stay 10 minutes from the hospital. That has made it a little bit easier. It looks like Emma will not be coming home this year and when she finally does; she will have monitors and a ventilator just in case. Please continue to pray for us as we have to deal with more setbacks. We were starting to see the light at the end of the tunnel, but now we are basically starting over.
Posted by Mark at 8:11 AM 2 comments:
Newer Posts Older Posts Home
Subscribe to: Posts (Atom)