Happy Valentine's Day!! Emma had a great time sitting for a special photo shoot for a card for Daddy. She's such a ham when the camera appears. Here are a few of the pictures. 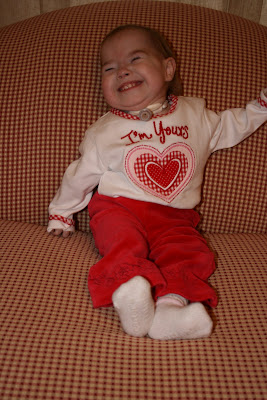 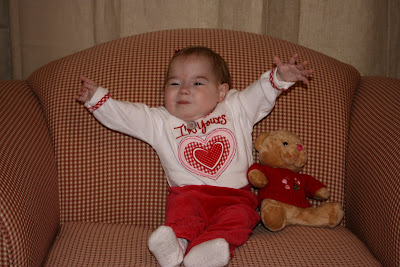 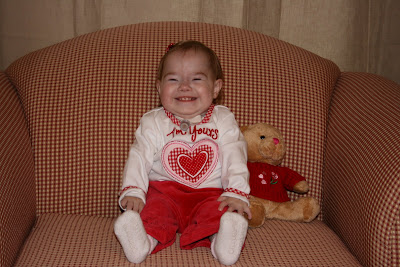 Sitting Pretty with my new teddy from Nana & Papa

We're All Moved In

On Thursday, Northstar Moving Company came and moved us to our new home. It is so nice to be back in Irvine. While we liked the area we were in, our neighbors were horrible. Out next door neighbors played their music so loud and we couldn't open our windows without having smoke blown in. Then 2 doors down we had the Raider Nation. They screamed at each other until late at night and let their kids run wild past midnight. We will miss some of our neighbors though. We wish they could have moved with us. Our new place is a home, not just a house. It is quiet and we have enjoyed being able to keep our windows open. We are literally right across the street from a major shopping center, so we have been waking over there for hardware supplies, dining, coffee, and home decor. While it will take us a while to get through all the boxes, at least they are in our garage and not scattered throughout the house. We were even able to entertain a few people during the Super Bowl! As soon as we unpack our camera, we will take some pictures and post them here.
Posted by Mark at 10:40 AM 3 comments:

When Children's Hospital at Mission needed to fill the position of Parent Service Coordinator, the hospital staff all pointed to the one person that they thought would be great – Alissa Ford.
Ford has been filling the role for about six months, lending support to parents with children in the Neonatal Intensive Care, Pediatric Intensive Care and pediatrics units and is making quite an impact.
"It is a vital role. It helps us to understand what the families are going through and it helps the families understand what we are going through," said Liz Drake, NICU clinical coordinator for CHOC at Mission.
Letting families know they are not alone, Ford acts as a non-judgmental, supportive figure that is there for them, she said. A shoulder to cry on, lending an ear to listen, translating medical lingo or simply getting a glass of water for someone, she helps families in whatever way they need.
"She makes you feel a little more connected to a situation where you don't feel connected to at all," said Ann Henstridge, former NICU mom.
Perhaps Ford is effective in her role because she has been through a similar experience.
"Nobody can understand like someone who has been through it," said Drake.
Ford's daughter, Emma, was born 10½ weeks early and spent 10 months under hospital care. Baby Emma was born weighing 2 lbs. 1 oz. and a mere 13 inches long. She was on a ventilator for four months, had open heart surgery, relies on a tracheotomy tube to help her breathe and feeds through a tube.
Emma, now 18 months, has taught her mother to be flexible and to be patient with progress.
"I have learned a lot from her and it gives me a sense of what other people go through," said Ford.
As a mother, Ford uses a different approach to explain situations to parents. She expresses things in a way that the hospital staff might not think of, said Drake.
"Look at their faces," is a piece of advice Ford frequently gives. Even though the hospital staff is rushing around, if their faces are relaxed there is a good chance they are not super concerned and there is not any imminent danger, Ford said.
"I give them a perspective that not everything is as scary as it seems," she added.
Ford feels her personal experience in the NICU gives validity to her position. She lets families know that in some respect she has walked in their shoes and she knows how she felt. But the one thing she never says is, "I know how you're feeling."
"You can have someone say, this, this and this but if they haven't been through it, they really don't know," said Ford.
Not only has Ford had an impact on patients but the hospital staff relies on her as well. They will seek her out to see if there is anything they can do for the families.
"I have worked here for 25 years and she still surprises me with the things I can learn – and I love that," said Drake.
Ford said it means the world to her to be able to come back to the hospital and make a difference. During the time her daughter was recovering she thought there had to be a purpose for what she was going through.
Now she realizes her purpose is to help others.
"I felt it was important to give back to not only the staff but the parents who are going through what I've been through," said Ford. "If I can take the fear out of being in the hospital or a little bit of fear away from the families that are here then I feel like I am successful."